Activists rallied on Saturday in Dorchester at a home that they took over to make a statement: Housing is a human right.

The hardest part of battling eviction is the not knowing, Lavette Sealls said. “You’re always living on edge because you know eventually you might have to move,” she said. “You go on fighting as hard as you can.” 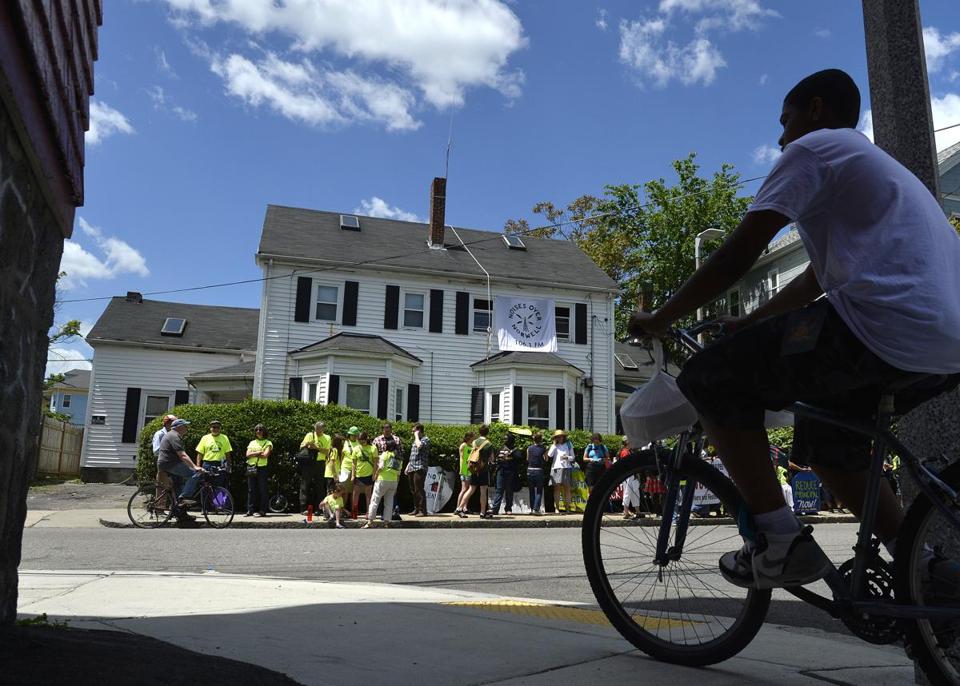 The 58-year-old Hyde Park resident told her story to a crowd of more than 60 at a rally for affordable housing in Dorchester on Saturday. The day’s main event was the occupation of a vacant home owned by Fannie Mae, a symbolic step toward reclaiming a neighborhood plagued by rising housing costs that have led to foreclosures and evictions.

A community organizer for City Life/Vida Urbana, which is part of a coalition that held the rally, Blanco said the event was about creating a home for a family who lost their Roxbury house after a foreclosure.

Paul and Renée Adamson, the couple moving into the house, said they would risk eviction in order to make a statement: Housing is a human right.

They found themselves homeless a couple of years ago after being displaced from their longtime Roxbury home by City Realty Group. They’ve moved around since, staying with relatives or trying to rent. Now, finally, they will have a place to stay, said Paul Adamson, 61.

“If I’m given a rental figure, me and my wife would be more than happy to pay it,” he said.

Foreclosures and predatory loans have hit neighborhoods such as those in Dorchester hard, Blanco said, spurring a renters’ crisis with a shortage of affordable housing. The occupied house on Norwell Street became vacant in February when its previous owner was forced out, she said, and Fannie Mae has rejected offers by a local nonprofit developer to buy it.

Fannie Mae did not immediately respond to a request for comment.

Laura Foner, a board member of City Life, said she has seen rent reach unaffordable levels in her Jamaica Plain neighborhood.

“The city government and the business community need to make it a priority to retain affordable housing by maintaining what exists,” she said. “If not, there will be more homeless families.”

Foreclosure rates have fallen sharply since lenders seized more than 1,200 Boston properties in 2008; last year, lenders completed fewer than 100 foreclosures. But Blanco said people are still fighting to remain in or reclaim their homes, something the Adamsons’ occupancy represents.

“It’s not just a stunt,” she said. “They’re in need of stable, affordable housing.”

Protesters kicked off the event by marching to the house and chanting, “We’re going to stop these evictions.” They carried home-made signs: “Reduce principal now” and “Equity not eviction.”

The rally also celebrated the launch of Noises Over Norwell, a radio station based on the property that broadcasted the day’s events. Organizers said they will dedicate air time to the “noises” of everyday living, such as the ambient sounds of watching TV and making dinner, to spark conversation about what makes a home.

“I hope people listen,” said Ken Tilton, a volunteer. “A lot of people don’t understand that it can happen to anybody. It happened to me. You can be one, maybe five paychecks away from homelessness.”

Geraldine Louis, a longtime Dorchester resident, listened to the rally from her porch near the occupied house. She supported the protesters, who she said were providing a service by highlighting mortgage companies’ unfair practices.

“Just let them pay for rent,” she said. “Don’t kick them out. Don’t put them on the street.”

Paul Adamson told the crowd “we’re being displaced by people who want to come in and turn it around and charge $2,400 rent.”

His wife sat smiling as she listened to speakers testify.

Looking at the white house with black shutters she will now call her own, she said, “Space. It’s a little thing you forget to appreciate.”