Late last year, two Mattapan grandmothers, Ruby James Saucer and Michelle Ewing of 22 Rexford St., each received notice of $700 rent hikes from their landlord, PCS Dixwell Realty Trust owned by Christ Stamatos and Josh Cohen. Stamatos is affiliated with Jamaica Plain based Pondside Realty. The grandmothers - who live on small, fixed incomes - consulted with lawyers via the housing justice organization City Life/Vida Urbana and refused to pay the unaffordable rent hikes. But Stamatos and Cohen responded with 30-day eviction notices. Since then, the grandmothers have been battling the evictions in court.

In the pouring rain on Thursday, September 26th, Ruby and Michelle led a rally and march that stopped first at Pondside Realty on Centre Street, holding a rally there before marching to the headquarters of PCS Dixwell Realty on the Jamaicaway.

"This is exactly the kind of predatory real estate practice that's tearing our communities and families apart," said Steve Meacham, a housing 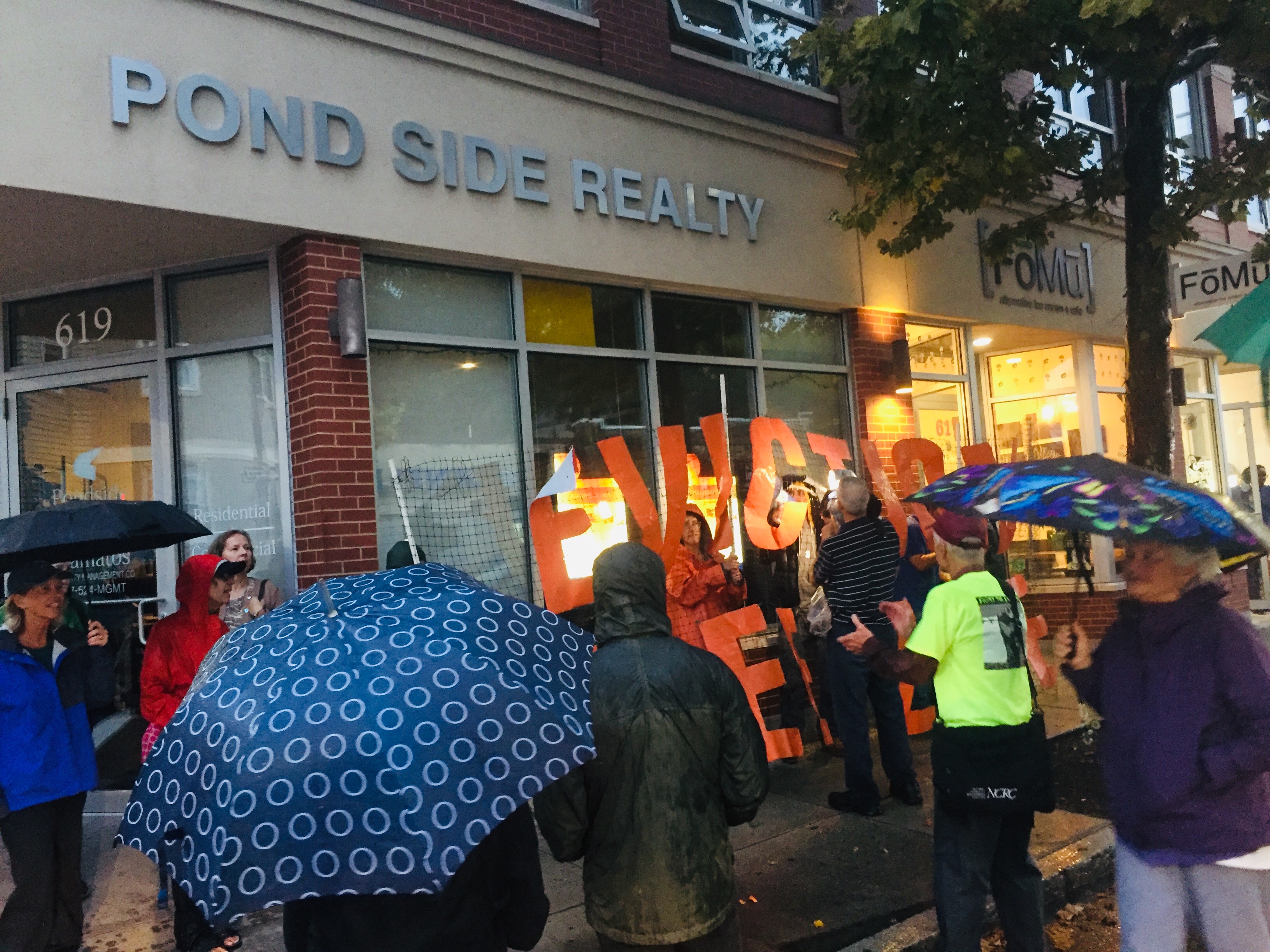 justice organizer with City Life/Vida Urbana who is helping the women keep their homes.

The rally rode on the coat-tails of last Saturday's launch of a city-wide campaign for rent control. Over a dozen resident-led groups in the Right to The City Boston coalition kicked off the campaign at the Boston People's Plan gathering, ending the day by door-knocking around the city in support of rent control.

Michele Ewing is a long-time community activist. She has lived at 22 Rexford St. for 25 years. Most recently, Ewing worked at Jobs with Justice as part of the Mature Workers Program, supporting the labor rights movement. Ewing is deeply involved in the newly-formed Mattapan Council, helping to monitor development proposals. Ewing has raised 3 children at 22 Rexford St., one of them still calls the apartment home.

Ruby James Saucer is also very involved in the movement for housing justice. She was active in fighting predatory loans during the foreclosure crisis. Saucer has attended countless City Life meetings to help Boston residents organize to save their homes. After moving to 22 Rexford St. 4 years ago, Saucer was elected to the Mattapan Council. Saucer now serves on the Leadership Team of City Life/Vida Urbana.

“I’m fighting to help other people in the same situation that I am in - the threat of being homeless. I’m fighting the predatory developers who want to come in and take over Mattapan,” says Saucer. 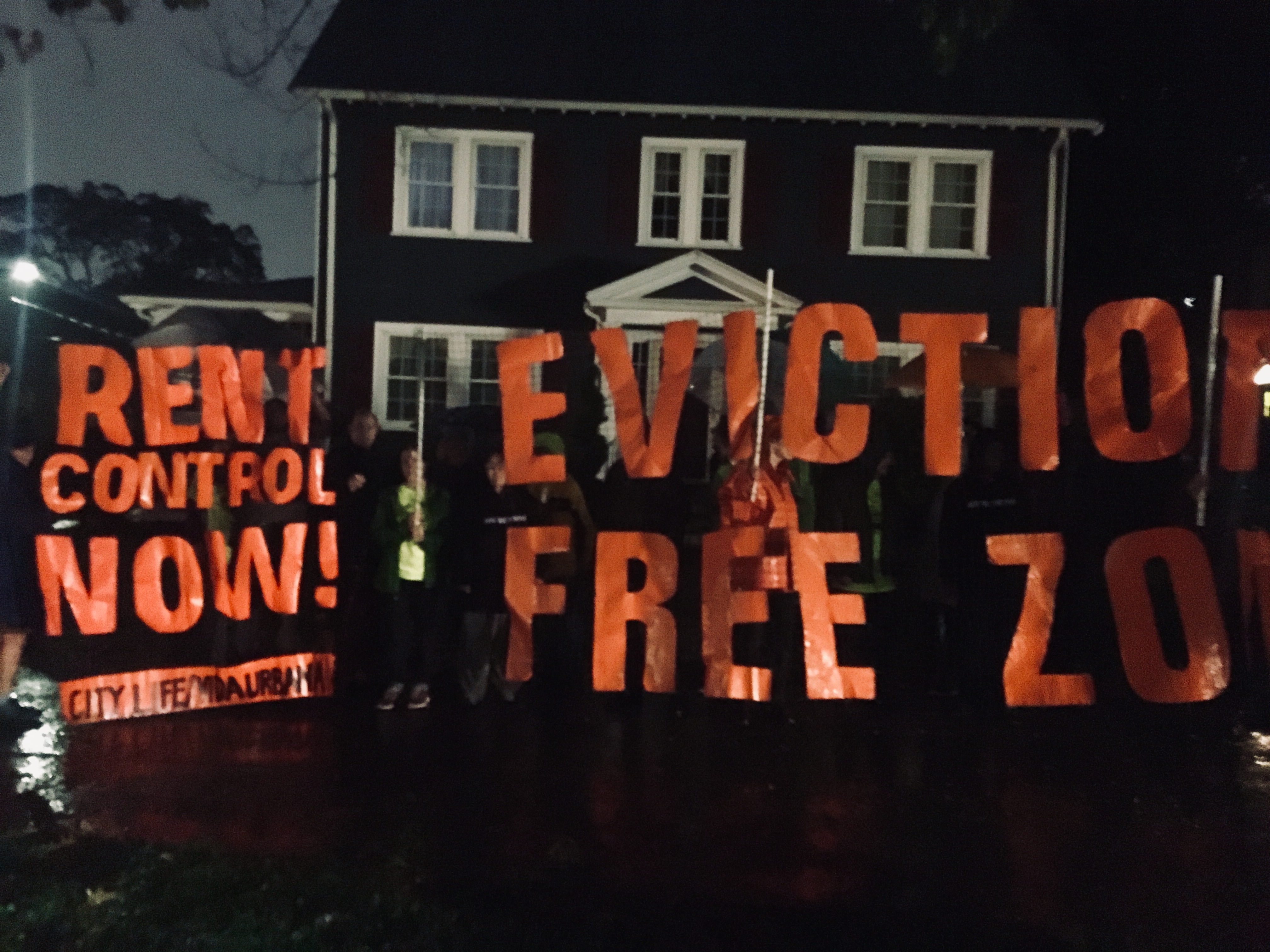 Both Ewing and Saucer have made it clear that they're fighting for stable, affordable homes for themselves, their neighbors and their community. In their letter to Cohen and Stamatos dated January 8th, 2019, they said the following:

"Michele wants a Sec. 8 rent that is limited to the payment standard set by the BHA. This standard is adjusted for unit size and utility allowance. It keeps the tenant share at 30% of income. Ruby wants a limit to rent increases of 3% per year."

Thanks to everyone who stood in solidarity with these brave elders. We await a quick resolution to these outrageous rent hikes and evictions.